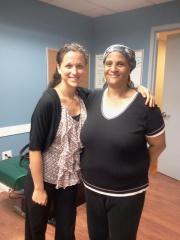 Before I started coming to advanced holistic I was a mess.  five years ago I went through a brain stem surgery to remove a tumor.  After this highly complex surgery, it left me with many symptoms: depression, weight gain, brainst

em pressure, anxiety, headaches, tingling in my legs and arms, brain fog, mood swings, and hot flashes.  My hormones were completely unbalanced.  I felt like I was dying!  I started this program in march thanks to my brother, who knew I needed help fast.  Since coming to AHH I have lost weight, I am happier, more active, and just want to live again.  I am a retired nurse and my medical doctor told me I would never work again but I know that I will be working again very soon.  I know I am on my way to great health.  Thank you Dr. Diana for being cheerful all the time because it now rubs off on me. Thank you for giving me my life back.  I am no longer fearful!"

From the Journal of Pediatric, Maternal & Family Health comes a case study published on March 12, 2012 documenting the resolution of infertility in a woman previously diagnosed with a case of Polycystic Ovarian Syndrome. Polycystic Ovarian Syndrome is a condition in which there is an imbalance of a woman's female sex hormones. This imbalance can lead to infertility and affects approximately 6.6% of reproductive-aged women.

The authors of the study start by reporting that infertility is a wide-spread problem that affects one in five couples. Of these it is estimated that 60% are due to a female health problem. As a result 9.3 million women seek infertility treatment at some point during their lives. Most of the care sought is medical care.

A chiropractic examination was performed including a spinal and nerve system analysis. It was determined that subluxations were present in multiple areas of the woman's spine resulting in nerve system malfunction. A series of specific spinal adjustments were initiated to correct the subluxations.

In their discussion and conclusion the authors discussed how subluxations could cause infertility by stating, "A subluxation is characterized by a dysfunction of the nervous system that results in widespread physiological changes and altered health status." The authors continued to discuss the additional benefits in this case by noting, "Following initiation of chiropractic care, the patient not only became pregnant, but also reported improvement in many facets of her life, including improved sleep, better dietary choices, increased water consumption, and an improvement in her ability to exercise."

In the March 2008, issue of the the scientific periodical, the Journal of Manipulative and Physiological Therapeutics (JMPT), is a case series documenting specific chiropractic techniques helping women suffering from monthly menstrual pains. This study looked at the effect of specific chiropractic adjustments on women who suffered with monthly menstrual pains from dysmenorrhea.

The study was conducted on 13 women with an average age of 26 years, with the youngest being 20 and the oldest 45. The women included in this study all reported that they had symptoms of primary dysmenorrhea during all of their menstrual cycles during the previous year. All of the women suffered from low back pain, lower abdominal pain, and general abdominal pain each menstrual cycle.

The time period of the study covered 2 menstrual cycles for the women so the effects of care could be looked at for two consecutive cycles. Prior to care, all women were asked to rate their pains so that a baseline could be established. All subjects were asked to initially rate their pain from 0 to 10 with zero being no pain and ten being the "worst pain you could possibly imagine".

The researchers concluded that menstrual pain associated with primary dysmenorrhea may be alleviated with the specific chiropractic care rendered in this study.

Disclaimer: Chiropractic is used to remove interferences (subluxations) so that the power that made the body can heal the body. We make no claims to treat or cure any disease. Please be advised that any information provided prior to an office visit is for general education purposes.

Find out how we can help
you improve your health

Detect the hidden cause
of your health
concerns

Join us for a FREE Dinner
Talk with Dr. Ray Omid

Read What Our Patients Have to Say

I first came to AHH in sever pain following a sports injury.  Over the next several weeks, while addressing the injury, I learned about the bigger picture, the steps we can take for maximum wellness through a full lifestyle and adjustments. All of this done the natural and most logical way.  My thanks to Dr Ray and the whole team at AHH for their dedication to happiness and wellness.  My special thanks to Dr. Gus, my brilliant healer.  Almost one year in, I look forward to a long relationship with Advance Holistic Healthcare